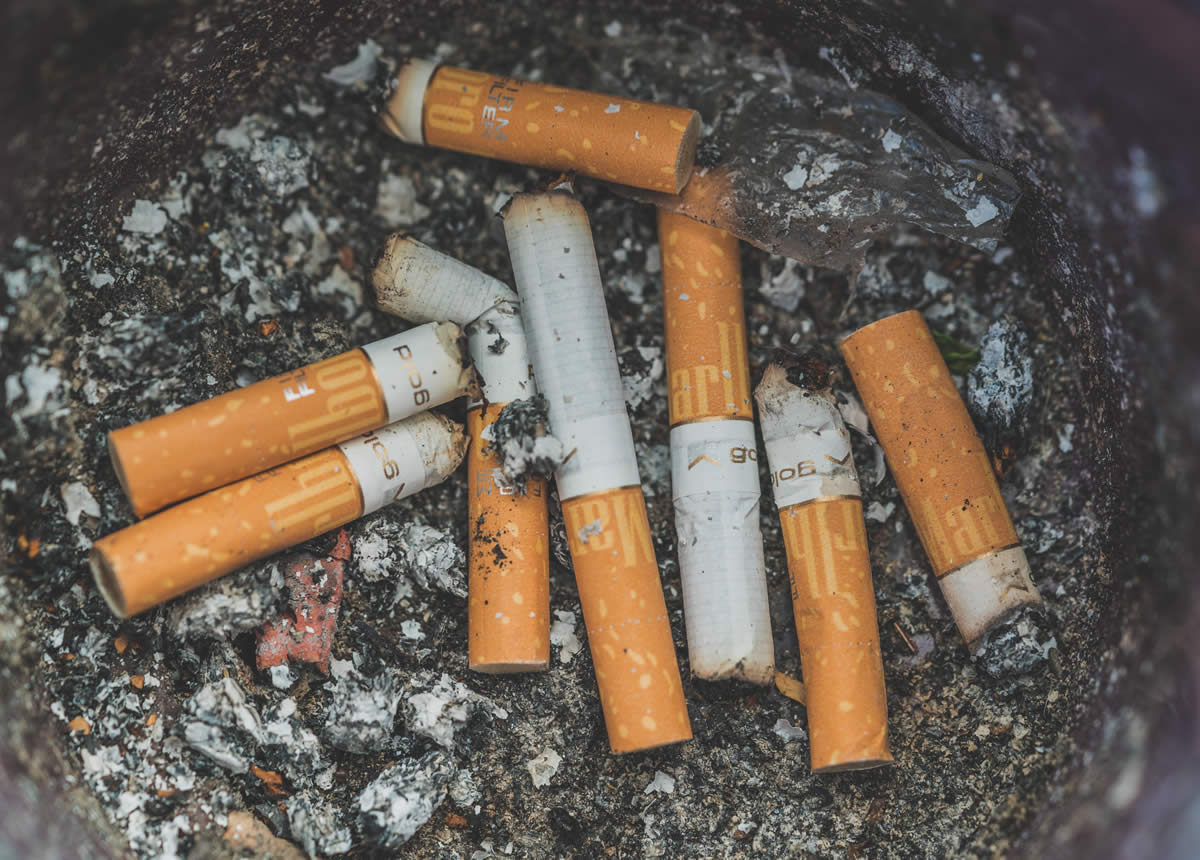 We’ve all seen it, the smoker who takes one last drag and flicks the cigarette butt onto the ground. It’s instant litter that California Sen. Hannah-Beth Jackson wants to prevent by banning the filters in most cigarettes.

The Democrat from Santa Barbara’s bill, SB 424, would ban filtered cigarettes, disposable plastic holders and mouthpieces, and single-use electronic cigarettes. It also calls for manufacturers to take back any non-recyclable parts of reusable e-cigarettes. The bill cleared the Senate in May, but it’s now in the Assembly Committee on Governmental Organization—where previous cigarette butt bans have gone to die.

If Jackson’s bill meets the same fate, she warns the tobacco and e-cigarette industry could face an even more difficult road ahead. Alameda and Santa Cruz counties are considering policies of their own to curb cigarette butt litter. And the Beverly Hills city council just voted for a tobacco-products sales ban that goes well beyond the butt.

“The last thing these industries want is to have to deal with 58 county or 352 different city ordinances,” Jackson told CALmatters. “I don’t think these folks want to go there. We’re offering them an opportunity to do this on a statewide basis that frankly will benefit everybody.”

The bill is a work in progress: it leaves gaps, for instance, about how exactly a program to take back the non-recyclable waste would work. Jackson said her team wants to work out the details with industry input, like she did last year with her successful bill to create a pharma-funded program to take back drugs and needles.

So far, however, only vaping giant Juul has come to the table, according to Heidi Sanborn, executive director of the National Stewardship Action Council, the lobbying group sponsoring the bill. Juul, which sold a 35 percent stake to tobacco company Altria in 2018, has proposed amendments. But it’s uncertain yet how much influence it will have through this process.

To the rest of the industry, Sanborn said, “Something is going to happen, whether it’s local or state. And the faster industries come to the table, they won’t be on the menu.”

An enduring source of litter

The bill would have far-reaching consequences for tobacco manufacturers and retailers, since almost all cigarettes sold in the US are filtered, according to the Centers for Disease Control and Prevention. Most of those filters are made from a plastic called cellulose acetate, which even scientists working with the tobacco industry admit doesn’t readily decompose.

That makes cigarette butts an enduring source of litter. Ocean Conservancy volunteers cleaning up coasts across the world picked up 2.4 million cigarette butts in 2017, including nearly 200,000 in California—making it the most common piece of trash collected. More than 27,000 butts were collected on the shores of Lake Tahoe this past year.And cleaning it up isn’t cheap. San Francisco calculated that picking up cigarette butts cost the city nearly $7.5 million in 2009.

“It’s just trash that’s being thrown out in the environment,” said Patricia Holden, a professor at the University of California, Santa Barbara who studies environmental microbiology and chemistry. “Where else, in what other context, do we consider that to be acceptable? We don’t.”

Scientists like Holden are still investigating what exactly all these butts mean for the environment, but lab experiments suggest it can’t be good. Smoked cigarette butts leach metals into water. And Thomas Novotny, an emeritus professor at San Diego State University School of Public Health and founder of the Cigarette Butt Pollution Project, discovered that just a couple of smoked cigarette butts can kill off two different kinds of fish. Even the smoked filters themselves, without any remaining shreds of tobacco, were deadly in higher numbers.

“They’re toxic, and it’s preventable,” said Novotny. “And the remedy for something like this is SB 424.”

Jackson’s bill isn’t the first time California lawmakers have tried to ban butts. Assemblymember Mark Stone, a Democrat from Scotts Valley, has tried to get a filter ban passed three times. Each time, the bill died in the Assembly Committee on Governmental Organization Committee. “Cigarette waste is the most ubiquitous trash we find in beaches, parks, rivers, everywhere,” he said. “Cigarette waste is so ubiquitous, people stop seeing it.”

His bills, too, took aim at the filters. The reaction the proposal tends to get, Stone said, is “‘Holy cow, you’re doing what?’”

The worry is that filterless cigarettes would be even worse for smokers. And Neal Benowitz, a professor at the University of California, San Francisco who studies nicotine pharmacology, is on the fence. “We do not yet have evidence in people that filters do or do not reduce toxin exposure,” he told CALmatters in an email. Until we know for sure, he’d argue against a ban.

But historian of science Robert Proctor points to the tobacco industry’s long and deceptive history with filters to support a ban. “Filters are the chief design fraud that cigarette makers have been using since the 1930s to reassure people it is safe to smoke,” said Proctor, a Stanford professor and author of Golden Holocaust: Origins of the Cigarette Catastrophe and the Case for Abolition. “They’re more like a seatbelt made of wet spaghetti—they’re really illusory.”

In fact, filters have been linked to an increase in one particular kind of lung cancer called adenocarcinoma. One theory is that smokers may wind up taking bigger, deeper puffs on filtered cigarettes, exposing more of their lungs to cancer-causing chemicals.

“The public has been buffaloed into thinking filters filter when they really don’t,” Proctor said. “That’s why they are the deadliest fraud in human history and should be banned.”

Jackson’s ban goes further than Stone’s to tackle waste from electronic cigarettes, as well. These devices heat a nicotine solution to produce a flavored, nicotine-filled vapor, and range in form from the first-generation, disposable cigarette look-alikes to the USB-shaped reusable Juuls that are dominating the market.

The waste these devices produce includes everything from the painted metal case to the lithium-ion-battery inside and the disposable plastic pod or bottle that holds the liquid nicotine. For the Juul itself, a company spokesperson told CALmatters in an email that it “should be treated as any other consumer electronic device, such as a cell phone.”

As for the pods, “They can be thrown away in a regular trash can.”

But a spokesperson for the California Department of Toxic Substances Control said e-cigarettes and pods are classified as hazardous waste if they’re still smeared with nicotine when they’re tossed. Liquid nicotine is a poison and a pesticide that in large enough quantities can cause vomiting, seizures, and even death.

That means that e-cigarette users are supposed to contact their local Household Hazardous Waste collection facilityabout safe disposal. But Jeremiah Mock, a professor at UC San Francisco, has been finding the remnants of Juuls and Juul pods all over. “Mainly at high schools,” he said in an email. “But increasingly on sidewalks, curbs, and shopping center parking lots.” Novotny said he too has spotted Juul pods caught in stormwater drain screens.

Mock worries about public health consequences if children stick those nicotine-coated pods in their mouths, or if the nicotine leaches out. A 2015 study reported that lead could also seep from e-cigarettes and into the environment. “If nothing is done, the environmental impact will increase, and the risks will increase,” Mock said.

The bill as written doesn’t explicitly address the disposable nicotine pods for reusable e-cigarettes like Juul—although Jackson said they’re included. “Single-use pods would have to be taken back, or they’d have to create something that is beyond a single-use pod,” she told CALmatters.

Jackson hopes to work out such details with industry input, although she’s well aware of Big Tobacco’s history. “This industry has not demonstrated any kind of candor or honesty certainly over the course of time, but we can hold them to this,” she said. “Part of the role of government is to oversee these efforts.”

Juul did not directly respond to inquiries about how Jackson’s bill would affect its operations, or what it hopes to get out of negotiations. Instead, a company spokesperson said: “As part of our goal to eliminate cigarettes, we are committed to environmental stewardship and sustainability and are eager to engage with people and organizations that can help.”

Jackson isn’t placing bets on the bill’s prospects, though she thinks her colleagues are more aware of the need. ”I am optimistic,” she said. “I’m not willing to put any money down on it, but I do think that this is a conversation whose time has come.”

It’s a conversation at the local level, too. The Alameda County Counsel is currently reviewing a proposal to hold the tobacco industry responsible for its waste that was drafted by the California Product Stewardship Council and advanced by county Supervisor Nate Miley. And in Santa Cruz County, Zero Waste programs manager Tim Goncharoffis investigating a few different strategies, including a ban and a mandate that tobacco and e-cigarette companies have to help deal with the waste. “It’s not just a nuisance, it’s not just unattractive litter. It’s dangerous, and we need to address it,” Goncharoff said.

San Francisco added a litter fee to cigarette sales a decade ago that’s held up through a court battle with tobacco company Philip Morris. And now, the city has a ban in the works on electronic cigarettes that haven’t received FDA authorization, which Juul is preparing to fight.

Charles Sheehan, chief policy and public affairs officer for the San Francisco Department of the Environment, says e-cigarette and tobacco waste is a state-wide problem. “But that doesn’t mean cities can’t or shouldn’t address the issue if the state doesn’t act,” he said. “We see that time and time again—when cities lead, sometimes states and nations follow.”