Commentary: The reduction in smoking rates has dramatically increased the death rates from alcohol, drugs and suicide.

There must be a corollary between all the numbers. Now we add in the risk from marijuana and we are going to observe even greater increases in deaths in this group. And note, there should be a decrease in the death rate from tobacco use. 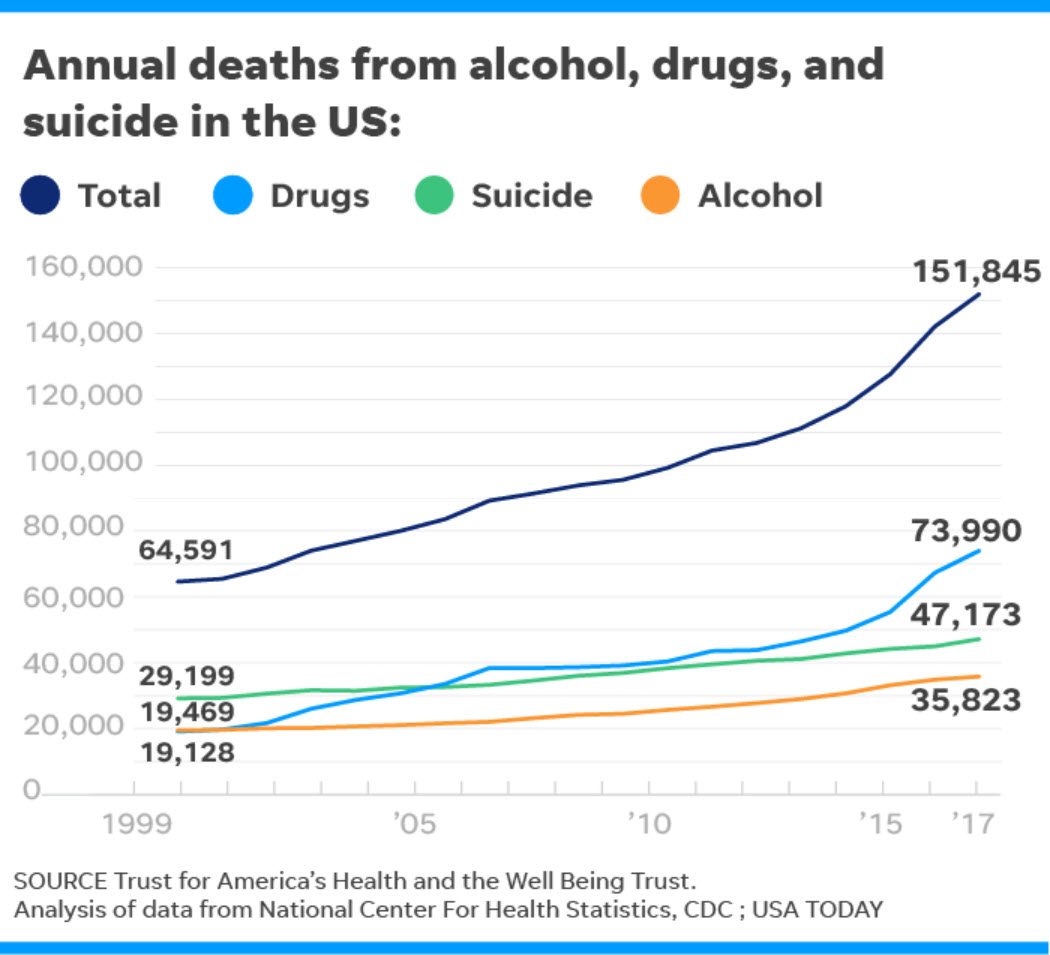 The number of deaths from alcohol, drugs and suicide in 2017 hit the highest level since federal data collection started in 1999, according to an analysis of Centers for Disease Control and Prevention data by two public health nonprofits.

The national rate for deaths from alcohol, drugs and suicide rose from 43.9 to 46.6 deaths per 100,000 people in 2017, a 6 percent increase, the Trust for America's Health and the Well Being Trust reported Tuesday. That was a slower increase than in the previous two years, but it was greater than the 4 percent average annual increase since 1999.

Deaths from suicides rose from 13.9 to 14.5 deaths per 100,000, a 4 percent increase. That was double the average annual pace over the previous decade.

Kimberly McDonald of Richmond, Wisc. is shown with her father Gerry Middag on her wedding day in 2003. Middag died by suicide in 2010 while suffering from Parkinson's disease and after he was also diagnosed with Lewy body dementia. (Photo: Family photo)

Suicide by suffocation increased 42 percent from 2008 to 2017. Suicide by firearm increased 22 percent in that time.

Psychologist Benjamin Miller, chief strategy officer of the Well Being Trust, says broader efforts are needed to address the underlying causes of alcohol and drug use and suicide.

"It's almost a joke how simple we're trying to make these issues," he says. "We're not changing direction, and it's getting worse."

The health and well-being trusts propose approaches including:

While overdose antidotes and treatment for opioid use disorder are needed, Miller says, "it's not going to fix" the underlying problems that lead people to end their lives, whether or not it's intentional.

In most states, deaths from alcohol, drugs and suicides increased in 2017. In five – Massachusetts, Oklahoma, Rhode Island, Utah and Wyoming – those deaths fell.

Deaths from synthetic opioids, including the narcotic pain reliever fentanyl, rose 45 percent. Such deaths have increased tenfold in the past five years.

"We don’t share our hopes and joys in the same way, and we aren’t as available to one another, physically and emotionally, as we need to be," says Stein, of Milford, Connecticut. "The world got smaller, but lonelier."

Miller agrees. When people feel a "lack of belonging," he says, "they seek meaning in other places."

That can lead them to withdraw into addiction. The new report emphasizes what should be done differently.

Kimberly McDonald is a licensed clinical social worker who has worked in a hospital, for county government and in private practice. She lost her father to suicide in 2010.

"We are a society that criticizes and lacks compassion, integrity, and empathy," the Richmond, Wisconsin, woman says. "I work daily with individuals who each have their own demons."

McDonald's father took his own life after diagnoses of Lewy body dementia and Parkinson’s disease.

"He knew the trajectory of where the disease would take him," she says.

John Auerbach, the former Massachusetts state health secretary who heads Trust for America's Health, says the country needs to better understand and address what drives "these devastating deaths of despair.”