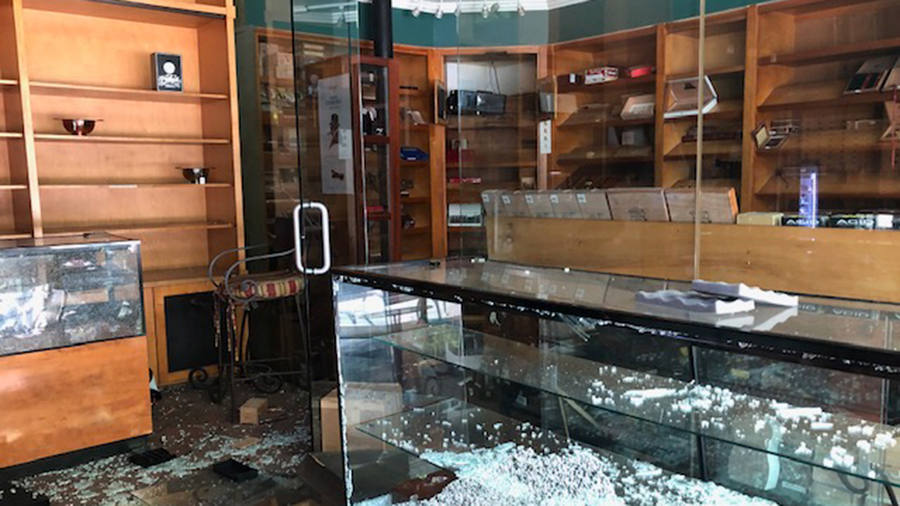 Just as the United States starts to slowly re-open and come out of the Covid-19 economic shutdown city by city, many retail stores across the country must now contend with a violent wave of vandalism, arson and looting that’s come with some of the protests responding to the death of George Floyd. And that includes cigar shops.

“Everything was taken or destroyed,” he told Cigar Aficionado. Weiss, who owns a second Lone Wolf shop in West Los Angeles, estimates hundreds of thousands of dollars in damage.

“This is heartbreaking for us, but much worse for our world,” said Weiss, adding that he had just reopened a few days ago after being closed for months due to the pandemic.

It was a similar story in Minneapolis, the city in Minnesota where Floyd was killed on May 25, sparking protests that later spread across the country. Anthony’s Pipe & Cigar Lounge on West Lake Street suffered extensive damage from a protest that turned destructive.

“They broke all my cabinets, everything was shattered, they broke my humidor,” Tom Harlan told Marketplace, a radio program regularly broadcast on local media stations. Harlan runs the shop, which is located in downtown Minneapolis and was vandalized two nights ago.

“They broke into the office, they broke my safe, they blew up one of my security cameras. They even took the plywood off the barber shop across the street and broke the glass and went in there,” he said.

Destruction also descended upon King’s Leaf Cigar Lounge in downtown Charleston, South Carolina. According to a report by The Post & Courier, shop owner Brian Lucier had just re-opened the store after being closed for months due to the mandatory Covid shutdown. When another protest in Charleston’s Marion Square turned violent on Saturday night, rioters hurled stones through the front windows of his cigar shop.

“All this just adds insult to injury,” he told The Post. “We’ve been bleeding for three months now and then this happens.”

Meanwhile in downtown Chicago, vandals also hit the Hubbard & State Cigar Shop. “They broke everything inside. All the cabinets. My cash register is gone. My computer is gone,” owner Rocky Mehra told WBEZ in a report. He added that “a lot of inventory, a lot of cigarettes, cigars, lighters. They’re all gone.”

One man in Bellevue, Washington, however, wasn’t going to take it lying down. A video posted on Twitter shows a person in a cowboy hat pointing a handgun at several masked looters inside a strip mall smoke shop called Cigar Land. They all filed out of the shop, one by one, mostly with their hands up, as the man with gun shouted, “Move, move, move!” Another armed man could also be seen holstering his gun and walking out of Cigar Land once the looters had left.

No injuries were reported in any of these instances.

Andrew Nagy contributed to this report.